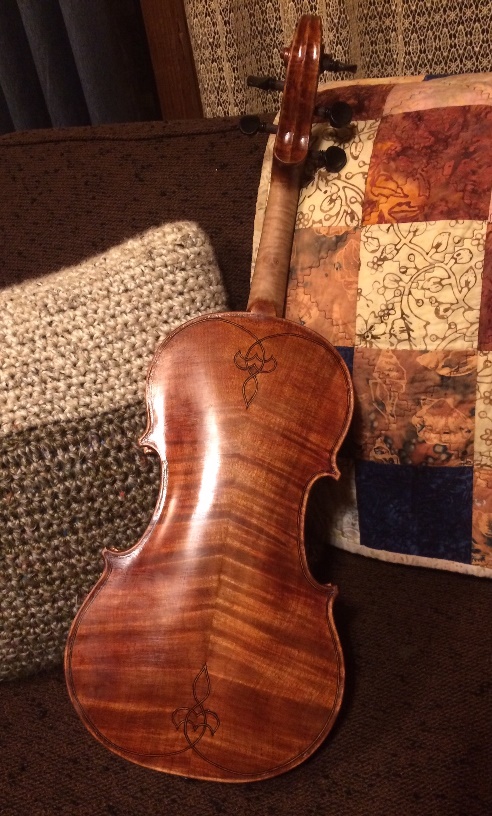 This one took awhile: Lots of sidetracks and other projects to complete. But it is finally done!

Back, Neck and sides

The back, sides and neck are from the “scrap” left over from building that five-string double bass last summer. This is the “sister-instrument” to the commission I built last winter, from the same wood-source, but the other side of the bass.

This and several other of my instruments are all from a log given me by the late Terry Howell. I have made one cello, one bass and several five-string fiddles from the wood of that log, and I still have a lifetime supply, thanks to Terry’s generosity. (see that story, here)

The front plate, however, is a first for me: Douglas Fir! This is unusual, but not unheard of: there are a number of professional instruments by Otto Erdesz out there being played whose front plates were made of Douglas fir. Will I always use it? Nope! But this turned out very well indeed! I am more confortable using spruce, and probably will continue to mostly use spruce, but it was quite an eye-opening experience to try the Douglas Fir.

The sound is very big, with a very clear, deep C-String, and perfect balance across all five strings. This fiddle will “cut through the mix” in a band, but can also play pianissimo when needed.

Overall, I am very well satisfied with the final result on this fiddle. I am confident that a buyer will find it a thrill to play.

Just an update: This week was a hard one, in terms of getting things done, because I had some repairs to do; but I did complete the varnish prep work on the most recent five-string violin, and then rubbed into it the mineral ground I use to fill the wood pores and prevent excessive varnish saturation.

The mineral ground dried rapidly, allowing me to accomplish the final rubdown before varnishing began: so, this evening, I applied the sealer, which is designed to soak in, and lock the mineral in place, after which the solvent evaporates, leaving only the resin in the wood. I rubbed off the excess with a rag and alcohol to make sure no unwanted residue was drying on the surface.

So, here is how it looks today. From here on out, it will be varnish and set-up: It promises to be a great fiddle! (And, it did!)

I always hang the fiddles in the dining room to dry, since we heat with wood, and that is where the woodstove is. The room stays warm, especially up near the ceiling.

This is a pretty accurate view of the color, so far: I intend to use yellow varnish as my base coat(s) to produce a golden glow from within the color-coats.

A shop in Charlotte, NC has agreed to take one of my fiddles on consignment.

The shop is called “The Violin Shoppe” and is a pretty important outlet in that area for stringed instruments, so I am thrilled to be represented there.

One of the owners, Glen Alexander, is a great fiddler, and demonstrated the posiblities offered by my little five-string viola, on his facebook page as well as on YouTube.

Here is the YouTube video: Glen Alexander putting my 5-string fiddle through its paces.

I’m gratified to see an Oregon Five-string fiddle, there, and to hear him play it!

Meanwhile, I have others on the way. 🙂

There was a famous maker, years ago, (Otto Erdesz, 1917-2000) who often made top plates for violas and violins out of Douglas Fir. Professional players bought and played his instruments, and they are still being played today, although many classical players insist that European spruce is the only “proper wood” for an instrument soundboard. Frankly, I usually would have agreed: all my experience with Douglas Fir seemed to indicate that it would not be a very good choice, even though I have played one of his instruments, and it was excellent. So, until this instrument, I simply didn’t try it.

Early this winter, a friend gave me a load of clean, dry Douglas Fir firewood. I heat with wood, and we had all been told it would be a bad winter (it wasn’t) so I really appreciated the gift. As I split some of it, I noticed that, unlike most Douglas Fir, it had no twist at all, and split easily and cleanly. When I picked up a chunk and tapped it, it gave a very clear, bell-like ring. (Hah! That spells “time to try some fir!”)

So I found one of the few pieces long enough to use, and carefully split it into useable billets, then sawed a center-line to book-match a plate.

I have been using a pattern modeled after the 1735 “Plowden” Guarneri del Gesu, a lot, lately, so I installed blocks in the mold, bent the ribs, and got going!

I had one more piece of “scrap” of Oregon Big Leaf Maple, from the 5-string Double bass I built last year, too,  and I was looking forward to making a fiddle out of it. I had already made one 5-string fiddle from scrap from the other side of the bass-back, (sold to a bluegrass fiddle player in Ohio) and it turned out very well, so I was anxious to get the “sister” instrument made.

The neck actually came from a tree on my wife’s parent’s place. I got started on it, as well:

Beginning to cut out the scroll requires a lot of saw-cuts, to outline the actual curl of the scroll, and then to remove the waste wood, using either a saw or a gouge…I used the saw, in this case.

Then I use various gouges and chisels to complete the scroll and the inside of the pegbox.

After the scroll and pegbox are very close to complete, I will prepare and attach the fingerboard and shape the two as a unit. That hasn’t happened, yet, so the handle portion of the neck is still rough and untouched.

Meanwhile I completed the carving of the front plate, laid out and cut the f-holes and began the purfling. Cutting the purfling slots by hand on Douglas Fir is quite difficult, because the winter reeds are exceedingly hard, compared to the softer summer reeds, and the knife just “pops” over them so that it feels as though it is running over corrugated roofing. It took me much longer to purfle this plate than it usually does for a spruce plate. (Ah, well! Perhaps that is one reason so few use it!)  But the tap-tones of this plate are exceptionally strong and clear: I still have high hopes for the power and tone of the resulting instrument.

(I neglected to get photos of the bass-bar process: it is also Douglas Fir, from the same billet. I will show it after I remove the mold…sorry.)

The graduations for the back plate are nearly complete, but today was a long day, and I will have to finish them tomorrow. So, here is where the progress stands, for tonight:

I hope to get the back plate completed tomorrow, except for the purfling, which will wait until after I install the plate. Then I will prepare the fingerboard and get it glued onto the neck, and I will feel as though I am “On the home stretch!” (But it won’t really be true: there still will be a great deal of work left to do, before it is anywhere close to completed.)

5-string Fiddle Back from Bass Back Scrap!

So, when I saw that there were two sections of “scrap” left over, near where the neck end of the five-string double bass back was cut out, I realized that a 5-string fiddle back could fit into each of those two pieces.

So, I salvaged the wood, and not only got two backs, but also the neck blanks for two 5-string fiddles.

Five-string fiddle back cut from the scrap left from a 5-string double bass back.

I really like the look of the Oregon Big Leaf Maple back wood. I enjoyed arching the plate.

On all my five-string instruments I usually include a purfling weave. It is a modified fleur-de-lis I designed for my first five-string fiddle and have continued to use on subsequent work.

In this photo, the slots for the purfling have been incised, but not cut deeply, so the next step is to slice deeply enough that the waste wood can be removed from between the cuts, and the purfling strips inlaid in the resulting slot.

I will include the purfling process in subsequent posts.