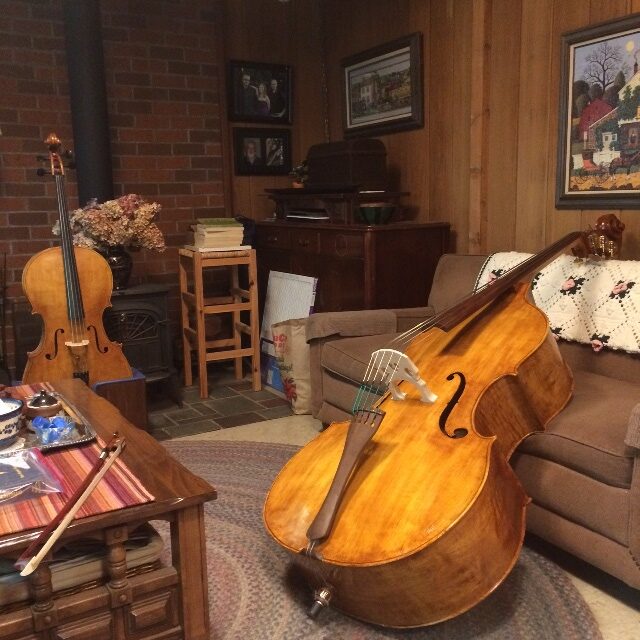 On violins and violas, the end-pin (usually called the end-button) only serves as an anchor-point for the tail-gut. But, in cellos and double basses, it also must serve as a height-adjustment, so that the instrument will rest at the correct height for the particular player. In this case, I had chosen an Indian Rosewood plug with a tubular steel end-pin fully adjustable and locked by a thumb-screw on the bass side. I installed it earlier, so here it is, without details about shaping the plug or reaming the hole:

I cut my saddles with a large radius on each of the upper corners, where the saddle is cut into the front plate. There is a strong likelihood, historically, that cracks will eventually develop, emanating from the corners of the saddle. They are so common that they have a name: “saddle-cracks.” There are two ways to try to avoid such cracks:

I already explained all this, including the purpose of the saddle, in a previous post. Suffice it to say that this part is already completed.

There is a wide variety of choices for tuning machines for a double bass. Some are better than others, some fairly plain, but fully functional and reliable, others beautifully engraved or ornate in some other way, and understandably far more costly. Someone had to spend the time and money to do all that “pretty stuff,” so, if you want that, you gotta pay. I chose plain but functional. (They are pretty, too, but not fancy.)

At any rate, they are already installed on this instrument, as of my last post:

The soundpost is a “dowel,” usually of fine-grained spruce, that spans the gap between the inside of the front plate and the inside of the back plate, just south of the treble bridge-foot. My understanding is that it transfers the vibration from the front plate to the back plate, and “couples” the two plates so that they work together to make the sound from the vibrations created at the strings (whether by bowing or plucking.)

There may be (probably is) more to this function: It is an important enough part of the set-up that in some languages, the soundpost is referred to as the “soul” of the instrument, and it is definitely one of the most important adjustments that can be made. It is held in place simply by the compressive force transferred through the bridge by the tensile stress on the strings. Adjusting the position of the soundpost has a profound effect on the character of the sound the instrument can produce.

I already installed the soundpost, but I fully anticipate that I will continue to adjust it as the instrument settles in, in an attempt to produce the best tone, volume and balance that I can achieve in the sound of the instrument.

The nut is the transverse piece of hardwood (usually Ebony, but in this case Ipé, ) across which all the strings are resting, directly above the fingerboard. It serves as a positive stop for all five strings,  so that the strings are not in actual contact with the fingerboard when the player is not fingering a note, but are suspended about 0.5 mm above the surface of the fingerboard. the idea is that an easy touch from the player’s finger should put the string in contact with the fingerboard at the correct position for the desired note. The nut is glued to the neck and fingerboard, usually, but in reality, it is held in place by string tension, and the glue is “just a formality.” (I glue them so that they can’t fall off and get lost, during transport or a string change.)

I carefully laid out the string locations, so that they are spaced equidistant, center-to-center, and then cut the slots for the strings using first a small razor-saw, and then a round file of the appropriate diameter for the string in question.

I chose to make the tailpiece of Ipé wood, to match the fingerboard, nut and saddle. The tailpiece fret (transverse bar forming a positive “stop” for all five strings) is also Ipé, and after being heated and bent, it resisted being glued. I eventually took it off entirely, scraped off all the failed glue-layers, washed it down with acetone to remove the oils in the wood, and reglued with epoxy. But this time, I anchored it with six small brass rivets. It is permanent, now! (Besides, I like the look of the shiny little brass rivets!)

I chose a bridge blank that was tall enough to serve with the projection angle I had already established, and wide enough to comfortably accommodate five strings.

I fitted the bridge feet to the surface of the bass front-plate, so that it would have an airtight fit when placed between the inner “notches” on the f-holes, and centered over the centerline of the plate.

Once the fit of the feet was established, I marked the bridge for the approximate height, hoping to achieve a string clearance of about 11 mm above the end of the fingerboard, but erring on the side of “too high.” (I can’t very well “put it back,” if I remove too much wood.) I then marked the locations of the strings, giving them 25mm from center to center. I filed the string slots, so that the strings would stay put when installed, and I went ahead and installed the strings.

It is quite a relief to me to finally have this instrument nearly complete. It was actually begun several years ago; but it was set aside for a variety of reasons, and only resurrected as a project, this Spring.

The sound, at first set-up, is satisfactory, but I hope to achieve a better balance, more volume, and better clarity as the instrument “settles in’ a bit, and with subsequent adjustments of the soundpost. But for now, I’m happy with it. It looks good and sounds good. For a brand-new instrument, that is a good start.

So, for now, that is it! There are a few “finishing touches” and re-touch of varnish, etc, as well as the aforementioned sound adjustments, but the bass is essentially complete!

I hope to make all the necessary adjustments, and then find a player or two to “test-drive” it for me, since I am not a player, and can’t do it justice.

I will post the “verdicts” from those players when they happen.

3 Replies to “Setting up the Bass”