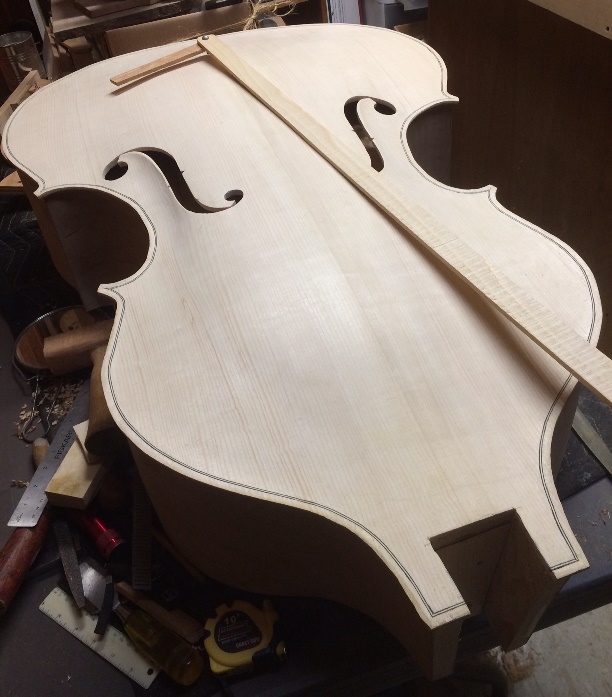 There are five measurements to consider in setting a neck on any violin-family instrument:

In the case of a bass, with a removable neck,  as well as all the other enormities of a double bass (as opposed to the smaller instruments) I had to not only consider the five measurements listed above, but consider how to achieve those angles reliably when removing and reinstalling the neck repeatedly. It all has to come together correctly without the customer having to “measure” anything, except to correctly carry out the assembly and minimal set-up.

I had already cut the “footprint” of the neck-heel, so I took measurements and laid out the proper shape on the end of the neck-block, where the mortise was to be cut. I worked from the centerline of the neck block, so there was less chance of ending up with a skewed neck.

Then I turned the corpus over and began sawing the sides of the mortise, using a thin-bladed Japanese pull-saw:

I checked the fit continually until all five measurements were correct, then removed the neck from the mortise, and began fabricating the “removable neck” apparatus that will enable the player to pack up his or her bass and transport it safely.

One of the things that concerned me was the possibility of wood changing shape through wear or stress. And, since the neck is to be secured by a bolt, how can I be sure that the bolt will not gradually wear into the wood, causing a loose fit?

I used screws and epoxy to mount bars of CF across the ends of the “joint” between the neck heel and the portion of the neck heel that will be permanently mounted to the corpus (and secured to the block and button,) so that a bar of CF on the neck heel slides under a similar bar in the mortise, thus providing an anchor of sorts.

Then I re-attached the two portions of the neck heel using a piece of paper glued between them, so that I could check the neck-set one last time, before gluing the root end in place and drilling the removable portion to receive the bolt. The paper provides a “breakaway joint” that will be relatively easy to separate after the heel root is glued home. it is only glued with a few “stripes of glue on each face, so the paper will tear apart and allow me to extract the removable portion the neck and finally complete the drilling, installation of a threaded insert, etc., and thus complete the neck set.