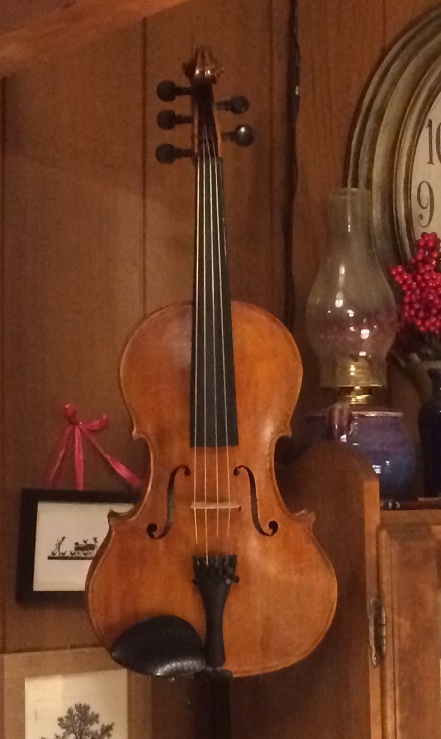 I began this instrument as an experiment, in 2010, but did not complete it. In fact, the only reason I know when I began it is that I wrote the date on the mold when I made it. It was intended to be a 14″ Viola with a very wide lower bout.

The wood for the neck, sides and the one-piece back is plain-sawn, Big-leaf maple with a two-piece Sitka spruce top plate. The workmanship is not as good as I try to produce today, so I might have simply discarded it, but, (I reasoned with myself) “it is just an experiment, to see what happens if you add a lot of width in the lower bouts.” If it turns out to work well, I will still have the mold and can simply make better, more professional examples of the same model.

What about a five-string Experiment?

So, back in September of 2019, it occurred to me that really I needed more 5-string fiddles on my website (especially violas), and that, if it worked, this was one I could complete more quickly…so I jumped back on it!

It still needs a good rubdown, a soundpost adjustment, and some play-in time, but today it is playing, and it sounds and looks OK, for what it is.

The voice is still a little too soft for what I want, but that could be the fact that the varnish is still pretty soft, too; and also, the soundpost is pretty tight  (which I know will need to change, but I also recognize that there is a tendency for the arching to relax a little and for the soundpost to be looser, after some time with strings on. Longitudinal compression of the top plate tends to try to shorten the top, resulting in a change in how the soundpost fits.)

All that to say, I am reticent to just jump in and trim the post, when it may actually need the extra length, in a few weeks, and with the varnish hardening off, and the playing-in beginning to take hold, I want to take my time about making changes.

The sound is (mostly) balanced across all five strings, but the C-string could use a little more focus.  Probably adjusting the soundpost and giving the varnish more time to harden will take care of all those issues.

Finally, because the repetitive tensioning and relaxing of the tuning is hard on strings, I have deliberately used an older set of strings for the set-up and trial period, so as not to sacrifice a brand-new set in what I know will shorten the life of the strings.

So! There it hangs in the dining room, where it will be warm, and we will see what the next week or so brings.